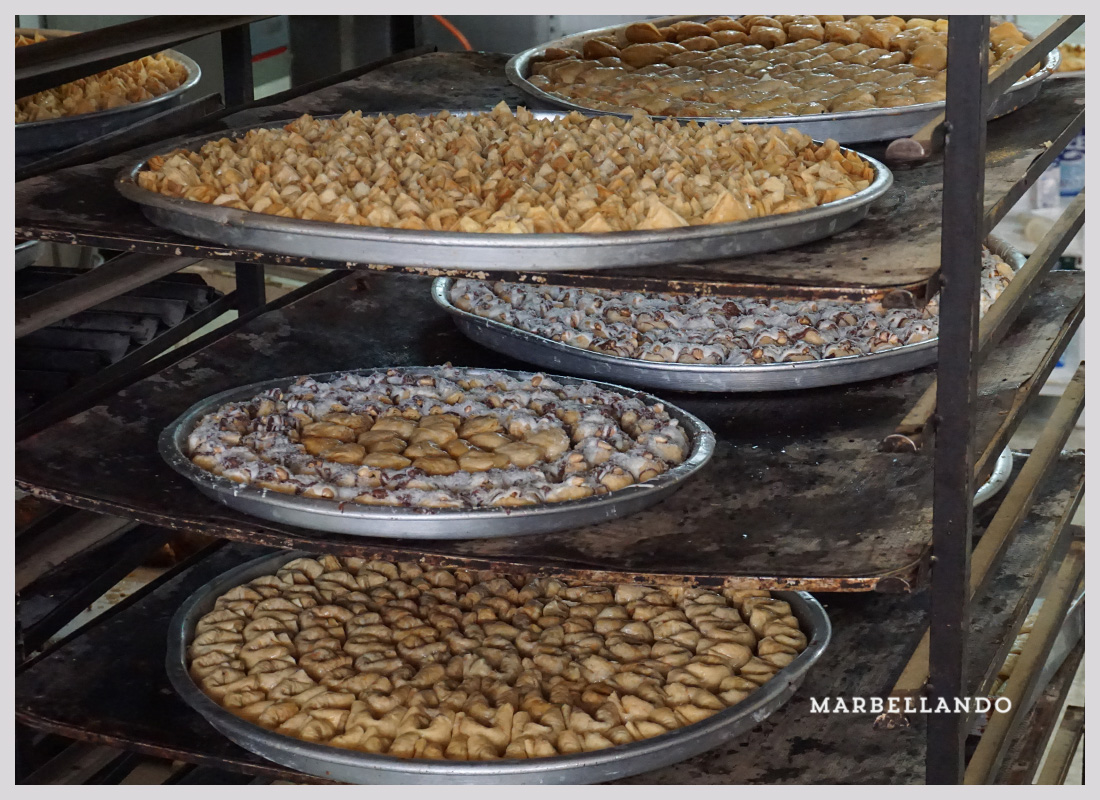 Some of the beauties of living in Marbella is that you get an exposure to other cultures and other peoples ways like if you were in a big city.

Todays example is one of many that simply blows my mind and makes me love Marbella more and more.

The “Poligono Industrial La Hermita” is a mine of cool business and interesting things. To me the industrial area of a town sais a lot about the place, true that Marbella has no industry, besides the tourism industry that is, but in absence of the old fashion industry this place exhales and abundance of others thing.

Want one example here is one, the Lebanese bakery and pastry work shop dating back to 1990 and owned by a Lebanese familly.

Fists and before go any further I must say that this people own a bakery-pastry shop in calle El trapiche, named La Espiga de Marbella. Witch is their official outpost, I went there once and.. ok it’s a bakery, Classic, with maroon granite and shiny wood and yes the have Lebanese stuff but is one more, nothing special. But when you actually go to the factory and see for your self how the make the goods, to me, it gains a new perspective.

I appreciate things different and gain more respect for the food and the work putting in to it.

The Bakery-workshop at la Hermita has no sing on the front door and its just adjacent by an other bakery, that I never been to, so as you can tell this place is something of a secret in Marbella. When I go its normal to see Lebanese people either form restaurant or private consumers that go in groups to purchase direct form the shop.

This bakery its not an sate of the art place , its quite hot, as the bake bread and other goods, its chaotic at times and the workers are for the most time minding their own business, do they are cordial and helpful. What I mean is that don’t expect to arrive here and see Willy Wonka´s factory as is not meant to be that way. It is what it is, and its what we love about it. It´s true, authentic, messy, warm and raw, and they make darn good Lebanese bread at a better price that if you buy it anywhere else, works for me.

I am no expert in Lebanese pastries, not a big fan either, but I have bought some once in a blue moon to get more used to them and hopefully to acquire a pallet for them. They have a nice selection of almond, cashew and walnut mini pastries, all made in a extra crunchy dough and smother with a super sweet honey like, perhaps its honey, liquid. I must say that one a year I kind of like buying a small tray of them. But it is truly fascinating to see the huge trays of pastry symmetrically cut and display ready to go to their end place. 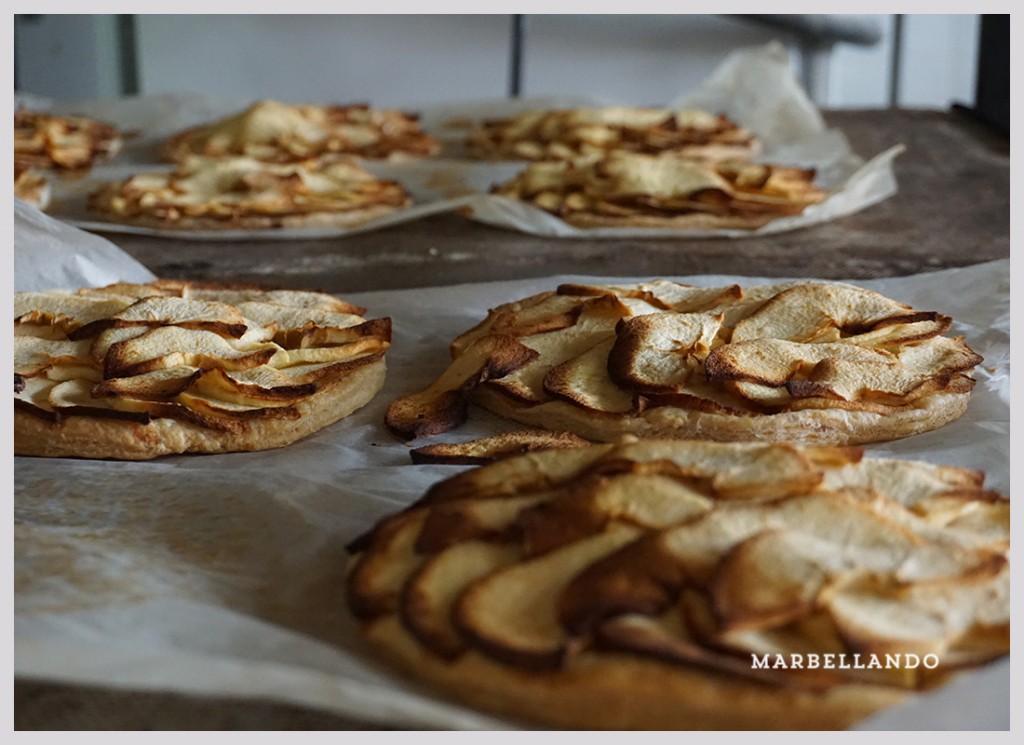 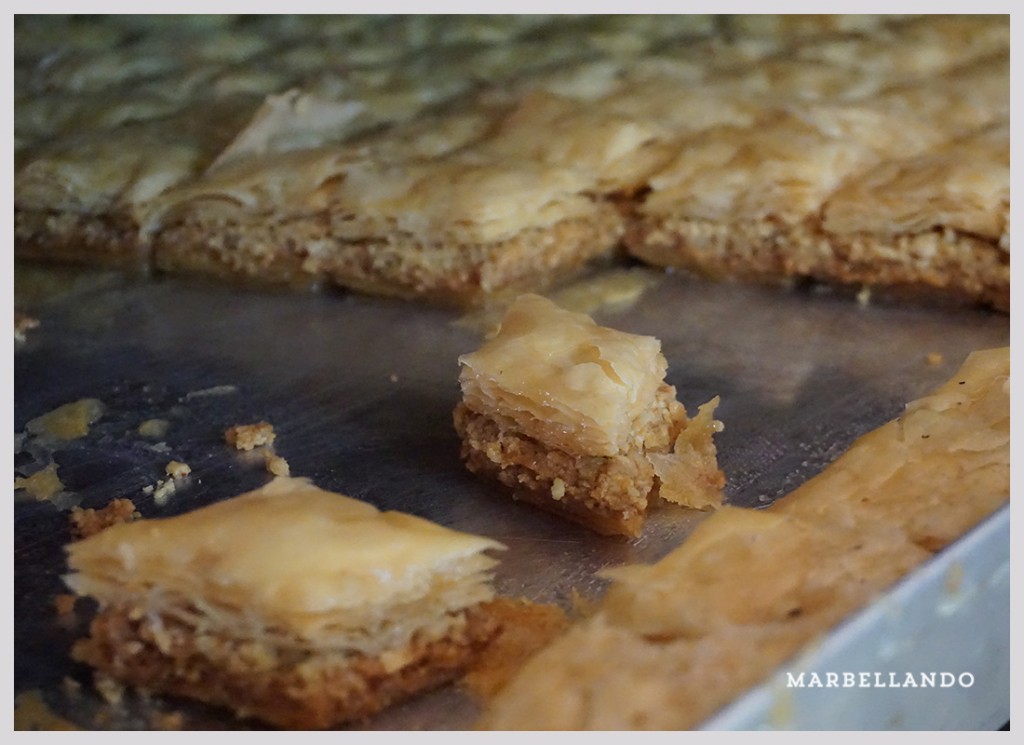 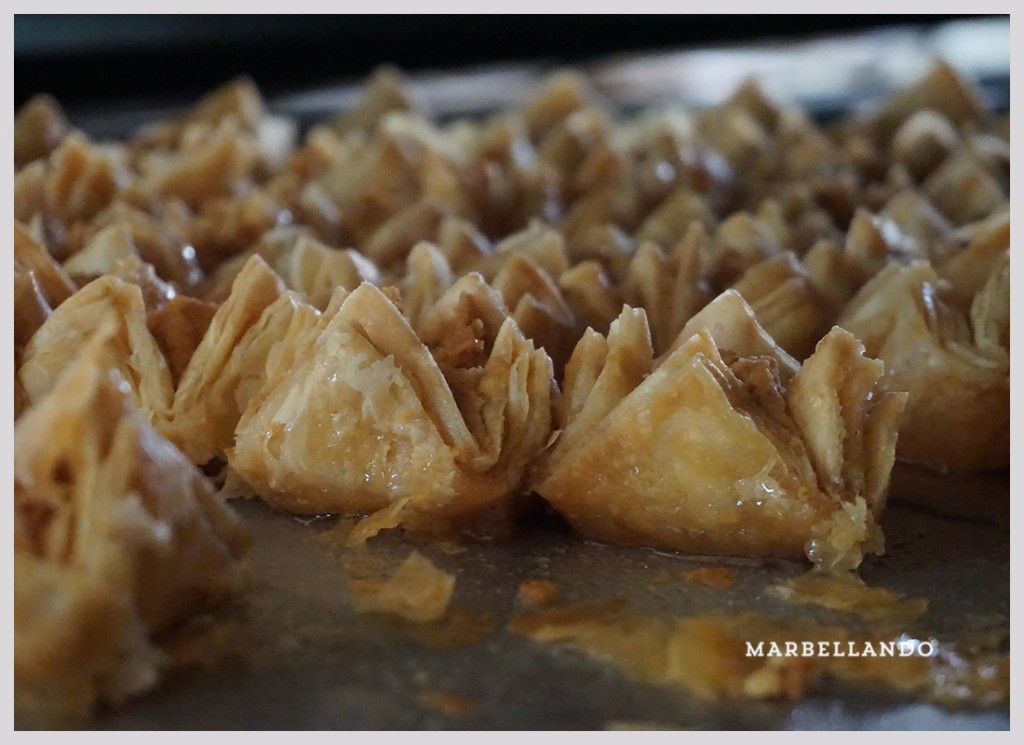 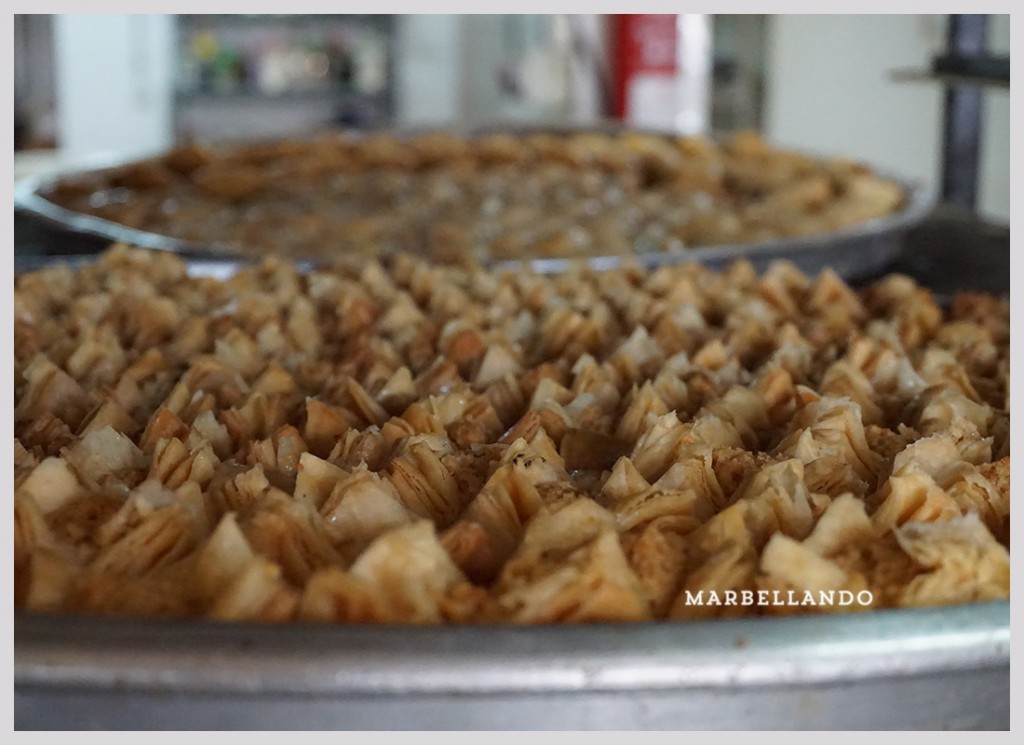 When I go I ask if I can browse around, they always allow me to but they look at my wandering if I am up to something, or it my desire its purely a curious one, but if the later was true, whom in their right mind would want to wonder around a place with flour, giant trays of pastries and extreme heat just for the sake of it? I can understand them as when you work at a place you seem to be desensitize from it all, and these things that seem to me like small wonders to them are jut their 9 to 5 job (probably its more like their 5 to 3pm job…)

Any way, the reason why I normally come here its to buy their Lebanese bread, or pita bread. They come in a bag of 5 units the bread dough it kneaded and then its more through a series of belt conveyors in order for it to expand, then its stretched and finally baked with fire. I normally get mesmerized when the bread comes out of the oven in pillow like shaped leaving a flare of fire behind them.

The pita bread its ideal to eat with home made hummus, or to make some Shawarma kabob.

The light, flexible bread allows to be dipped or warp around, it is of neutral flavor with, as it should be, but has a yeasty-salty touch that combined with the effect of the fire its creates a nice subtle balance that goes well with tons of dips and foods. 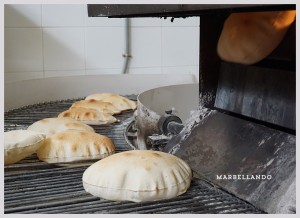 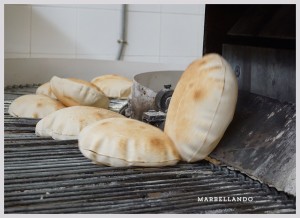 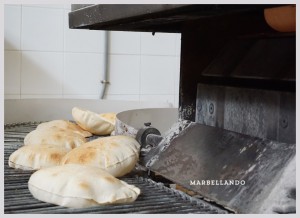 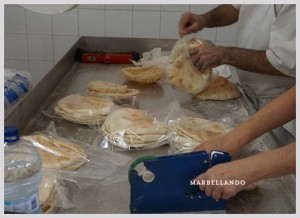 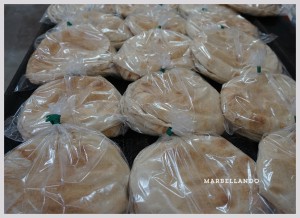 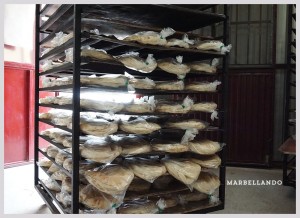 Pita bread its real versatile as it allows you to used it in many ways such as; an eatable plate, or cut the top and fill it up inside (since it creates a pocket like effect) you can obviously wrap a bunch of ingredients/left overs in it. You can cut then in triangles an bake them to make pita chips, or grill it to used as a Mexican tortilla, or like individual pizza bases.

We like it mostly for hummus, and Fattosh and even when we make Lebanese Tabbouleh 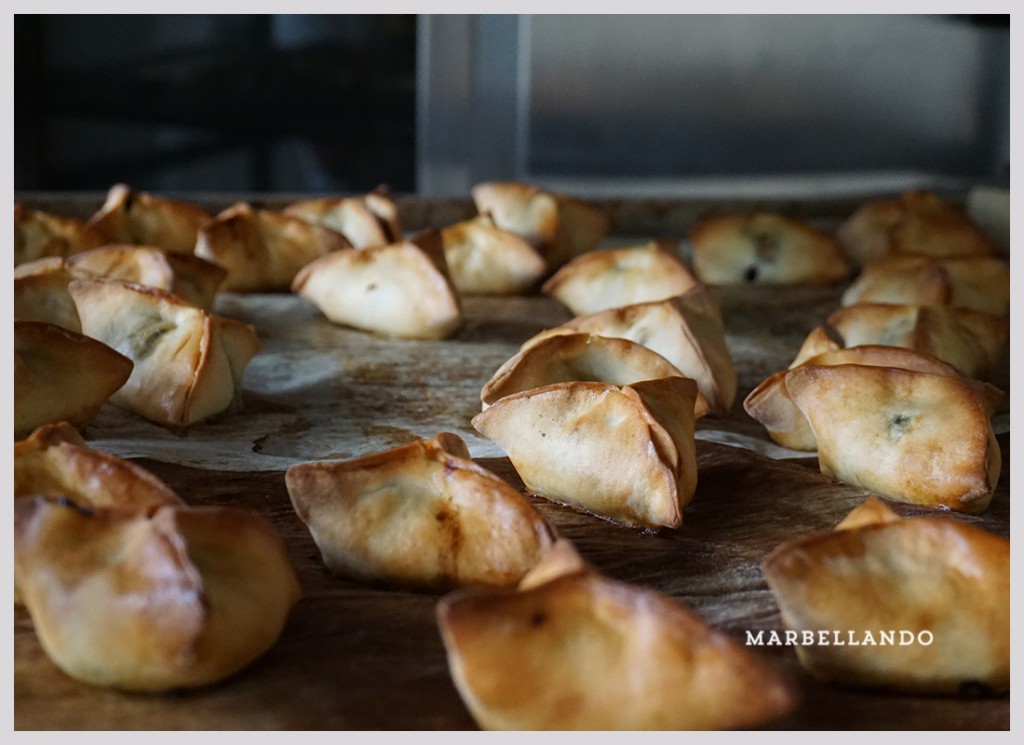 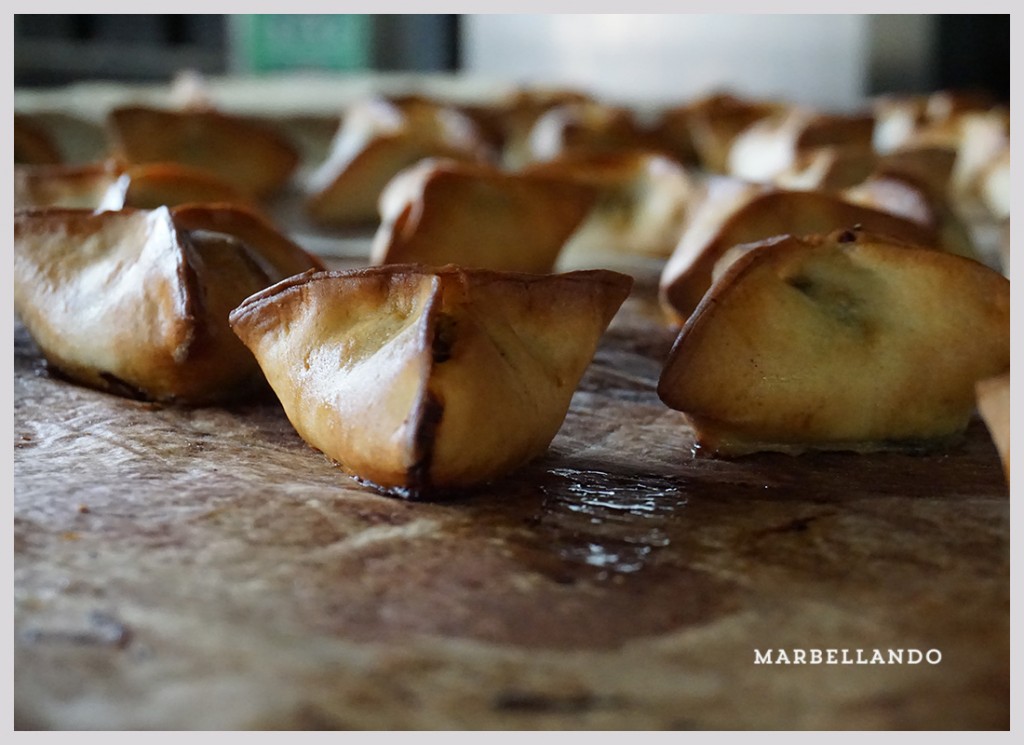 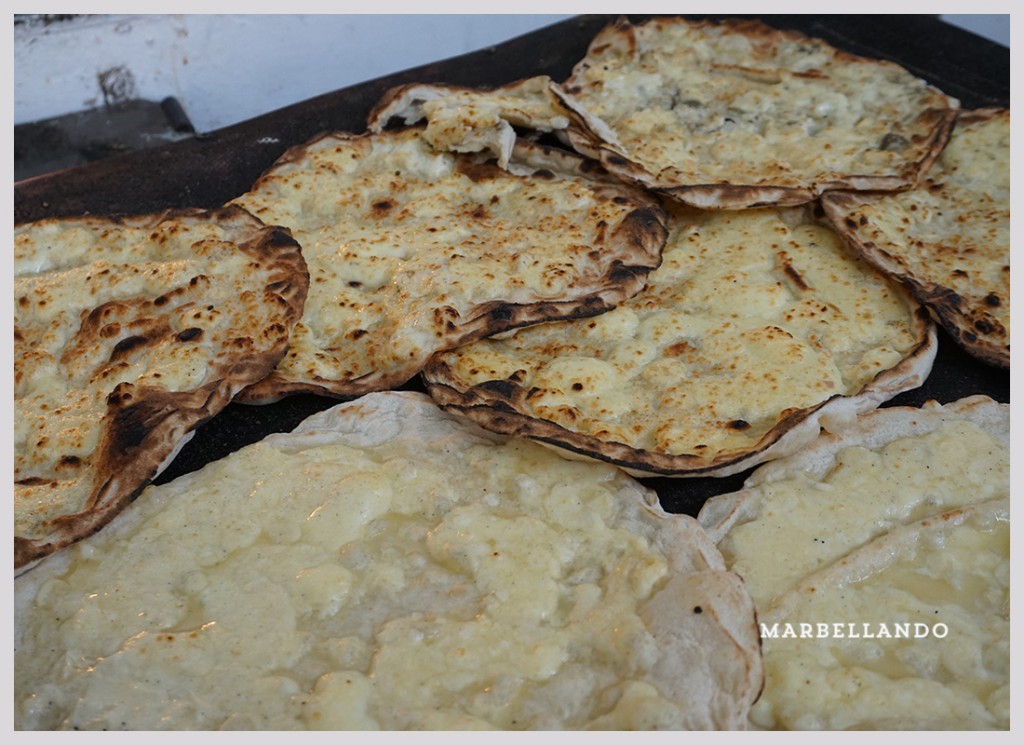 Should you want to pop by they are located at: